Low-cost 3D printers are becoming more commonplace in education at all levels. It is like computers entering classrooms twenty or thirty years ago. School and public library makerspaces have sprouted up, like “computer labs” back then. Just as little kids now produce Powerpoint presentations instead of crayon drawings (for good or for ill), so too are they learning to create complex and precise physical objects with CAD.

However, adoption of 3D printers in classrooms has been slow, in part because the technology got out ahead of the educational content for it. There are practical problems too: it takes some time for teachers to learn how to use a printer, and that’s time many teachers just don’t have. In 2015 we founded Nonscriptum LLC in Pasadena, California to help solve these problems. We build on open-source tools (like the CAD program OpenSCAD) to keep the costs of using our materials minimal for teachers.

For the last seven years or so, we’ve been trying to find good ways to leverage 3D printing and its sister technologies and help teachers see how to use them. It turned out, however, that just teaching how to use the technology was not enough. We also had to create materials that could be used in a classroom as part of teachers’ existing lessons, while still effectively showing what the technology could provide uniquely.

Our most recent book, Make: Geometry, covers many geometry topics using open-source 3D printable models. We also created a set of geometry lesson plans for teachers of the blind and visually impaired. Here, we’ll focus on why we created these models, and what barriers we are trying to remove with them. 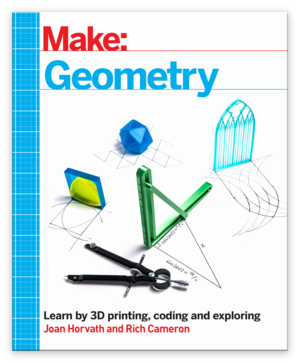 Teaching geometry with 3D printed models seems like particularly low-hanging fruit. Some students have trouble understanding 2D projections of 3D objects, and others can’t see drawings and have to depend on raised-line extrusions of projections. Geometry can be made physical easily in some cases, like 3D printing the Platonic solids. However, a lot of geometry is about relationships between objects or parts of an object. Capturing that abstraction in a physical model requires thinking a little differently than does capturing it in prose and diagrams.

Universal Design is a set of principles that says that if you make something better for a differently-abled population, you also often make it better for the general population as well. We found that to frequently be true while developing our hands-on geometry projects. In particular, we’ve found that models need to stand alone, and not be a forest of labels like they might be on the page. That means relationships need to be obvious, and, if the model comes apart, that it needs to be unambiguous how it goes back together.

In principle, you can make anything with a 3D printer, but some things are harder to make than others. We decided that simplicity should be a core principle of our models, and that they should print on a poorly-tuned, battered school 3D printer without fuss. We also wanted our models to be something that a student doesn’t just download and print, but a jumping-off point with options to change the design and make it their own.

If you want to create this model yourself out of paper, first use a ruler to draw any triangle. Then take a drawing compass and draw an arc of a circle of the same radius centered at each vertex. When you cut the pieces out, you should be able to replicate our 3D printed model.

One cultural challenge for teachers is assessing learning-by-making. When a student designs a model to demonstrate the Pythagorean Theorem, there’s no tidy box at the end of a worksheet to show the teacher the answer. It may be wrong in some subtle or not-so-subtle way, and that requires nuanced grading and correction.

However, it does lend itself to asking students to describe what else they learned beyond the given prompt. In this case, there’s the additional insight that half a circle has the same number of degrees in it as the sum of the angles of a triangle. Students do not need a complicated narrative to get started working this way. Give them the starting condition and what they are trying to prove, and let them discover from there.

Teaching tactile-first also means that you will naturally teach principles in a different order than you would if teaching blackboard-first. Traditionally, 2D geometry is taught first, and then 3D. That’s largely because the algebra is messier for representing something in 3D. However, if you are making models, it’s easier to make a 3D model, since real things are, well, 3D.

We have found it astonishing how little intuition most people have about the volume of a solid. We have a set of four objects that all have the same internal volume (cone, pyramid, cylinder and prism). If asked to guess which of these objects has the greatest volume, nearly everyone will pick the pyramid. However, after a little bit of playing around with the models and some sand or water to fill them, people begin to figure out relationships that are not at all obvious from 2D projections.

It’s not all about math and science, though. 3D printing also enables students to think about how things were fabricated in the past. Medieval cathedrals were designed without the benefit of modern measurement tools. If we were to tell you to construct a medieval cathedral with just a compass, straightedge, and a copy of Euclid’s Elements, how far would you get? Add in some computer-aided design tools and a 3D printer, and you might get quite a long way.

Let’s start by creating arches. Gothic arches are a lot simpler than they at first appear, and are constructed by overlapping two circles. To draw one, first use a compass to draw a circle. Then draw a second circle of the same radius with its center somewhere along the first circle. A Gothic arch is half the overlap. The resulting arch is a surprisingly mechanically strong construct, compared to earlier circular arches. Gothic arches transmit more force straight down than a circular arch does, making it less likely to collapse.

Fabricating arches accurately allows for experimentation with the strength of different types of arches. It also lets you imagine how the person who long ago invented the technique must have felt when they discovered their creation was vastly stronger than the old way!

A proper cathedral also needs a stained-glass window. The pieces of glass were held in by structures called tracery. We’ve developed a 3D printable model that allows you to create tracery by making arches within arches. Mathematically, these are quite simple, and can be constructed with compass and straightedge. In our case, they were constructed in OpenSCAD, an open-source CAD program freely available at openscad.org.

No one says learning has to end with constructing arches and tracery per se. Later, you can let a student know they have also learned a bit about construction in the mathematical sense from this exercise of playing cathedral-builder.

We’ve given you three examples here that we think are good samples of lessons we’ve learned in developing mathematical models, whether for the visually impaired student, or one who just learns better by interacting with physical things. As we saw in the triangle-angle model, it should be unambiguous how a model comes apart and goes together. If other relationships appear as the pieces are rearranged, so much the better.

The constant-volume model showed us that models of 3D concepts like volume might bring better intuition than 2D approximations and a lot of algebra. And, our medieval cathedral apprenticeship showed us that it’s easy to sneak in some interesting mathematical constructs while learning a bit of history.

3D printing can motivate general computer literacy as students navigate digital fabrication. Seeing a print that looked perfect on a screen fail on a printer can be a good object lesson in the difference between digital and physical reality, too!

It’s still early days of 3D printers in any classroom, particularly so in special education. 3D printing would seem a very natural tool to make models for students who have to depend on learning by touch. However, teachers of blind and visually impaired students have some built-in logistical problems. Many of those teachers are itinerant, traveling from school to school. This leaves limited time to start a print and grab it for a student before the teacher is off to the next place. 3D prints take a while, which can make it challenging to get prints for large classes fabricated between class meetings. Practical issues can often trump technology adoption, but the relevant communities are developing workarounds as the potential benefits become clearer.

We are just starting to understand how much more people can learn by adding tactile and 3D information to the traditional modalities of learning from a page or whiteboard. Will teachers (and kids) just use 3D printing for high-tech versions of volcano dioramas, or will the capability enable new kinds of exploration? Teaching tactile-first might require changing assessment and grading, but the reward might be expanded boundaries for many future students.

The authors note that some of the work described here was supported by grant number 90RE5024, from the U.S. Administration for Community Living, Department of Health and Human Services, Washington, D.C. 20201. We also want to acknowledge staff of the Smith-Kettlewell Eye Institute, Yue-Ting Siu of San Francisco State, and Chancey Fleet of the NY Public Library.

Images from Make:Geometry used with permission of the publisher, Make:Community LLC.

Ayudame3D: 3D technology at the service of the people

SEAT and 3D printing: The next big thing in automotive manufacturing?

DIISM-UNIVPM University on reaching the next generation of Additive Manufacturing