Sarah Goehrke is the Founder of Additive Integrity, Board Director of Women in 3D Printing and Managing Editor at Fabbaloo, making her super-qualified for our interview where she shares her passion for 3D printing and gives her advice on how to make sure everyone’s voice is being heard. 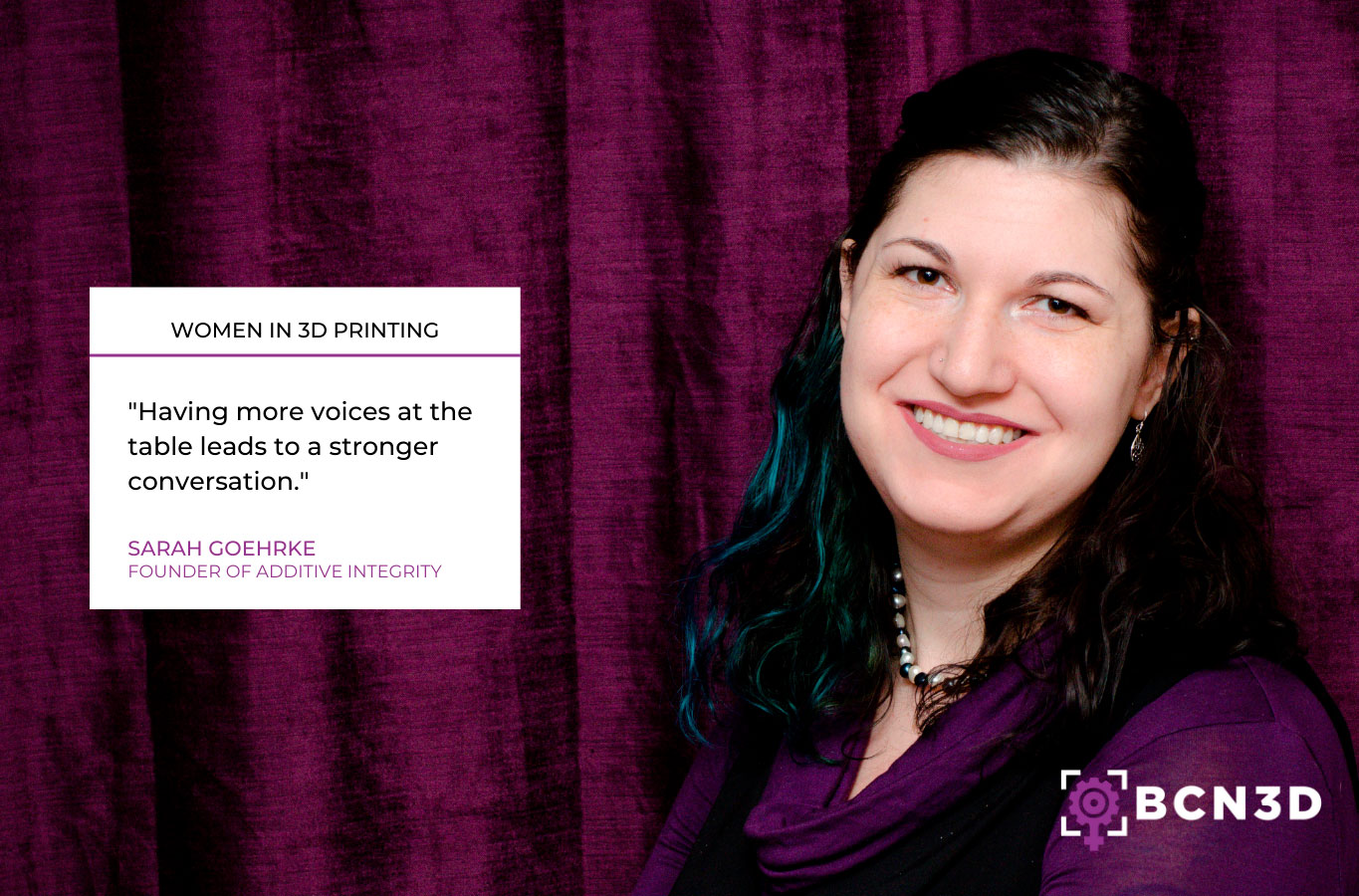 When you began your career in the world of 3D printing, what kind of environment did you encounter in terms of inclusivity?

“I have been working in 3D printing, primarily in journalism, since 2014. My personal career experiences were very inclusive. Working at a news startup, I had full support from my team, and when I stepped into a leadership role never had any negative experiences with my editorial team. I felt respected in the industry — and it was only about two years into my work, when travelling regularly, that I became more aware of the fact I was one of very few women in the industry. I was often the only woman in the room, or if not in the room, at the table for networking events. Especially because of my position as a writer, not an engineer or AM company employee, I became acutely aware of what that meant for women in those positions: there were not many, especially in visible roles. Most of the interviews I conducted (and still conduct) were/are with (white) men. Visible representation of a more diverse, inclusive workforce did not seem to be a priority. At a certain event, I also experienced sexual harassment, and felt very alone following the incident.”

Has there been an evolution from that time to the present?

“Yes. While women and other underrepresented members of the workforce remain obvious minorities, it’s been heartening to see significantly more attention paid to these inequities over the last several years. I’ve been proud to work with leaders of organizations like Women in 3D Printing to strengthen inclusive networking and career opportunities, and ensure conversations driving diversity are amplified. There’s a long way to go, but awareness is certainly higher in 2021 than it was in 2014.”

Why is inclusivity an important value to you?

“Aside from obvious business benefits — see the oft-cited 2018 McKinsey study highlighting the better performance of more diverse organizations — inclusivity makes sense on a human level. As a woman, I want to feel equal to my male colleagues. As a woman in a non-technical role, I feel I had lower barriers than others pursuing technical opportunities have faced. As a human, I want to see more universally equitable opportunities arise across the board. Being part of a minority group — female, BIPOC, LGBTQ+, people with disabilities — should never be seen as a limiting factor. Having more voices at the table leads to a stronger conversation. Additive manufacturing is an incredible technology suite, and a fantastic industry to work in; it’s shameful to think anyone might not share the opportunity to join this dynamic workforce because they are in some way different.”

Do you think women have more to prove to become relevant in this industry?

“Yes. I think the unfortunate truth is that many women are judged by what they can prove, and often report having to work twice as hard as their male counterparts. Until unconscious bias can be overcome on a more universal level, there will still be some who perceive women differently than men. This often means women will be asked to take notes, to fetch coffee, to run errands, to answer phones — to transfer calls when someone wants technical information, rather than have it be assumed that woman is a capable engineer with the answers. Women at trade shows are still often treated as secretaries rather than company representatives, whatever their position. There’s a barrier that comes with these biases, and it is often summed up quite briefly: “Prove it.” The playing field is not level when expectations are so uneven.”

What can we do to support the growth of women in tech industries?

“Support needs to be intentional. Because these efforts are addressing systemic inequalities based on decades (centuries) of precedence, it’s a long road ahead. Organizations must work to consciously build their staffs to better represent populations: that is, set a goal, then set a program to reach that goal. Benchmarks (e.g., 30% of board members will be female within five years; within ten years, 50% of management will be female) help to make real change. Working with industry groups like Women in 3D Printing, Women in Science and Engineering, Black Women in Science and Engineering, People of Color in Tech, Women in Engineering, and so many others can help expand networks and gather resources. Companies whose employees are interested in joining such groups should encourage membership. Celebrating employees and all that makes them unique is the best way to attract and retain talent.”

“I would like to see more companies working on establishing, publicizing, implementing, and hiring according to diversity statements. Actionable change is hard. Taking that first step and beginning to take accountability should be celebrated. At the minimum, companies should be celebrating their existing workforce, encouraging them to engage in organizations, and ensuring they retain the talent they’ve attracted.”

What advice would you give to a woman considering a career in the industry?

“Do it! Network, reach out to those who have gone before. Find role models, connect directly with a mentor, actively build a strong network. Learn skills in whatever area interests you. One benefit of pandemic life is the prevalence of webinars and events, many of them free; attend them, learn what interests you, learn how to learn about it. Engage on LinkedIn, read industry media sources, when safely possible again attend industry events.”

Are there any companies/schools/organizations you think are being a voice for women and minority groups at the moment?

“Of course, as a member of the Board, I would love to highlight the importance of Women in 3D Printing. This year, we hosted the first annual conference with an all-female speakers agenda: 147 speakers in five tracks across two days for the TIPE 3D Printing conference! So many important conversations and connections have already arisen following that event, strengthening the already-global Wi3DP network. Wi3DP has more than 10,000 members (men, women, nonbinary: it’s open to all!) the world over, with local (currently virtual) events to connect, learn, network, and grow. We’re growing resources, including input directly from industry leaders and a new NextGen initiative focusing on mentorship and encouraging the next generation of 3D printing workforce. And it’s amazing to see other efforts, initiatives, and collaborative organizations arising all the time! There’s a lot of work to be done, but more resources are regularly emerging to connect those willing to do that work to pave a better road for a more equitable future.” 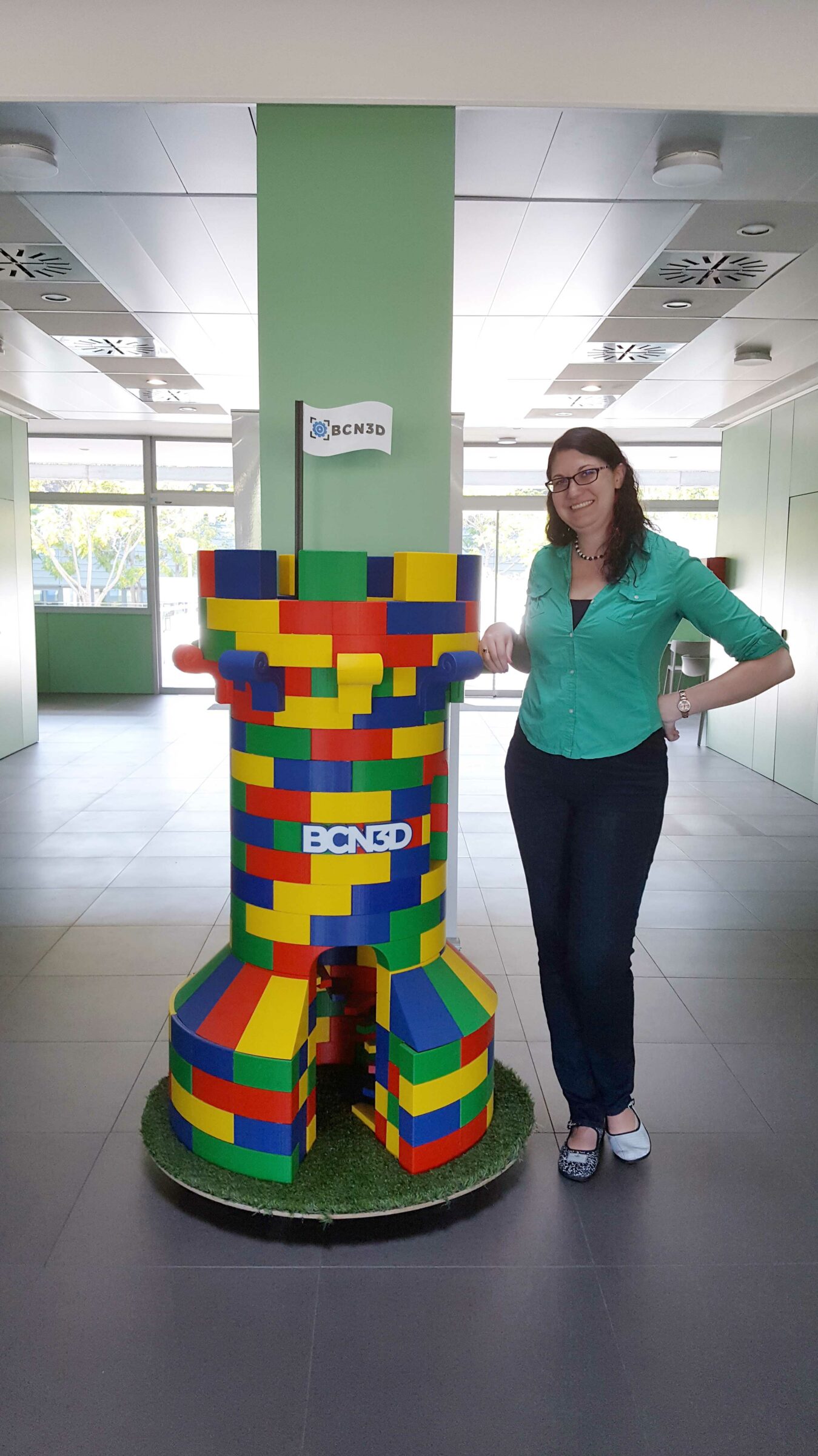