In the process of selecting materials for end-use applications, it is very important to take into account the chemical resistance of each element. To better understand the behavior of the main BCN3D filaments, we have tested them against the chemical attack of an organic solvent.

If you ever wondered: which is PETG gasoline resistance? Is PLA oil resistant? What happens with PLA and Ethanol? Well, this article may interest you because you are going to find out our filaments’ chemical resitance.

Chemical resistance is the ability of a material to resist impregnation, erosion, or degradation caused by contact with solids, liquids, or vapors of different nature, such as acids, bases, or chemical solvents. This ability can largely determine the success of each project.

In an industrial environment, we can find a wide variety of solvents, such as alcohols (ethanol and isopropanol are the safest and most used), ketones (acetone, ethyl methyl ketone), esters (ethyl and butyl acetate), and different mixtures of mineral and synthetic hydrocarbons, normally derived from crude oil. These last are the most common ones, normally used as cleaning agents or found in adhesive and coating formulations. Other organic substances that can behave as a solvent are fuel (gasoline, kerosene, diesel fuel), motor oil, brake fluid, cleaners and perfumes.

In the industrial sector, parts and tooling must be able to withstand contact with some of the mentioned corrosive products, given the nature of the materials with which they are normally in touch. Therefore, when selecting the filament to be used for 3D printing this kind of part, its resistance to these products must be taken into account. When exposed to these liquids or their vapors, some 3D printing materials begin to swell, absorbing the solvent and changing its shape and mechanical properties, and therefore should be avoided for certain applications.

In order to better understand the behaviour of the main BCN3D filaments when in touch with a corrosive product, and better determine which material to use for each specific application, we have tested them against the chemical attack of an organic solvent:

The experiment: 8 materials and 24 hours in an organic solvent

Testing parts with a shape specifically designed to favor the material degradation have been printed in 8 different BCN3D filaments.

This experiment was carried out by partially immersing these 3D printed parts in a small volume of organic solvent. The corrosive agent chosen was Nitro-P, which is used to dilute paints and is very aggressive. To maximize the damage, the 3D printed parts were immersed in the solvent for a period of 24 hours, and their change in shape and properties was monitored by a timelapse camera followed by a visual and physical evaluation.

The goal of this test is to simulate the effect caused by an accidental splash of solvent on a 3D printed object, a situation that could easily take place, since solvents are very common in workshop and industrial environments. We wanted to demonstrate the importance of carefully selecting the correct filament, depending on the application and the risk of chemical exposure, to ensure the safety and durability of the printed object.

What were we expecting? A Hypothesis

In theory, the parts that should have finished the experiment completely intact would be those printed with propylene. In opposition, the parts most affected should be those printed in PLA and ABS. Hygroscopic materials such as TPU or PA should have increased in volume. On the other hand, more hydrophobic or reversible absorption materials should better withstand this experiment, without causing major damage.

What did actually happen to the materials? 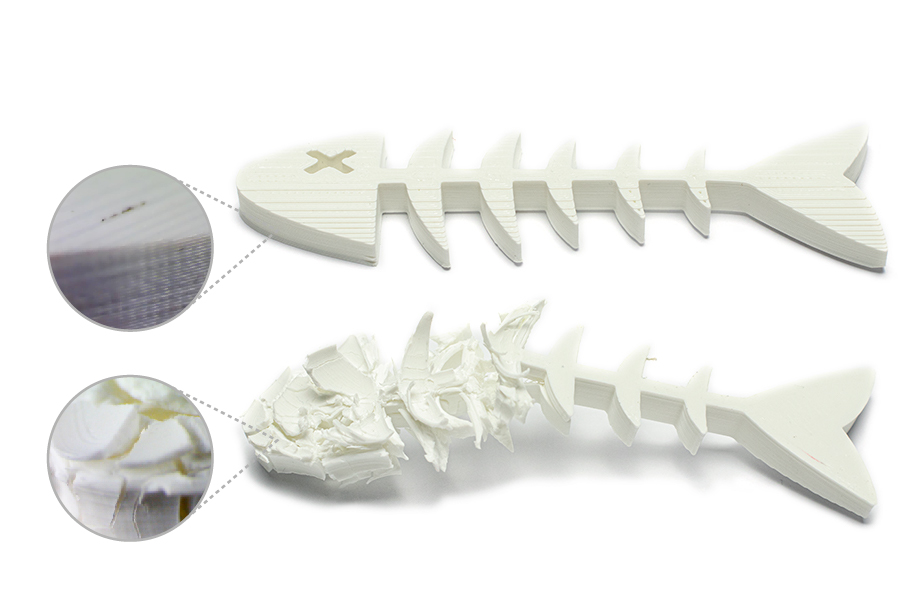 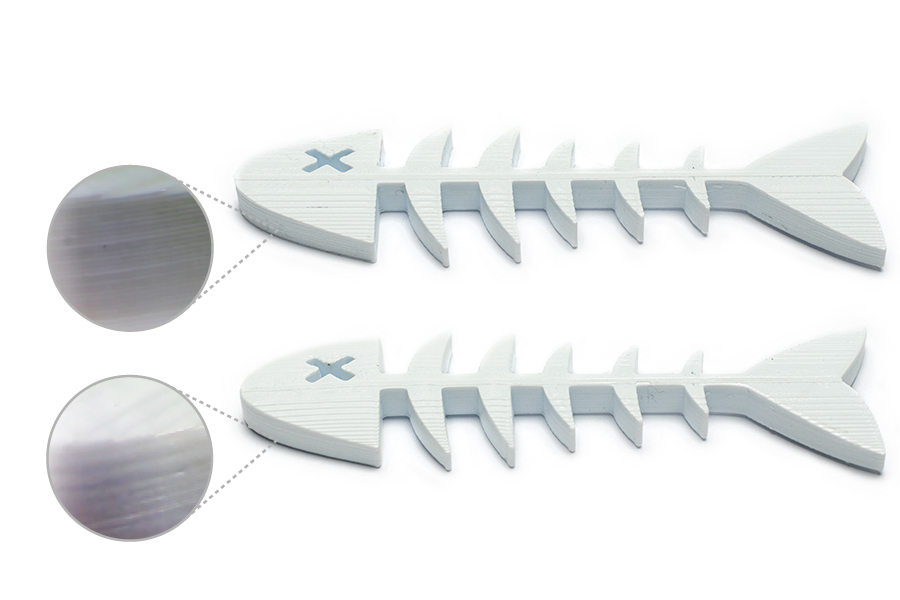 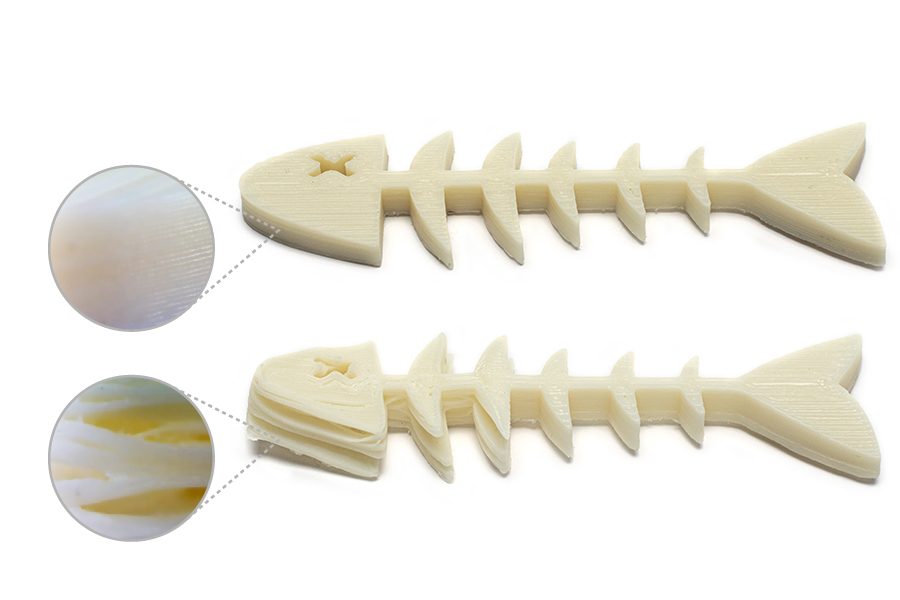 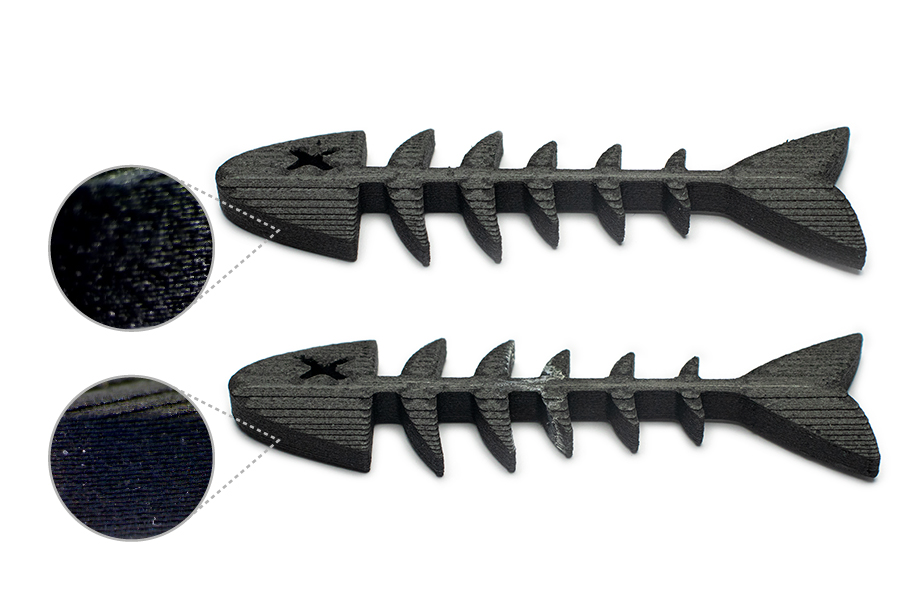 After only a few minutes of exposure, it was clear that some materials interact very fast with a strong solvent like the one used here. TPU and PLA in particular began to swell, absorbing a large amount of solvent. As a result, they increased their flexibility and reduced their overall strength.

A few hours into the test, the structural integrity of the TPU and the PLA was so compromised that the parties began to delaminate. Thus, at the end of the experiment, both TPU and PLA showed a completely exfoliated structure.

ABS and PET-G were also strongly affected by the solvent: while ABS literally dissolved, losing material in the liquid solution, PET-G suffered a more superficial attack. In its case, the solvent smoothed and softened the part’s surface while keeping intact its general shape, which seemed to have permanently lost much of its rigidity and resistance.

Both PA and PAHT CF15 swelled slightly, but retained most of their original shape and resistance.

On the other hand, neither PP nor PP GF30 were affected by the action of the solvent during the entire duration of the test, proving to be the ideal materials for any kind of industrial application in which the 3D printed parts would need to withstand contact with similar corrosive substances.