Student racing team ETSEIB Motorsport uses 3D printing to manufacture end parts for their electric vehicles. Thanks to additive manufacturing, pieces like cooling ducts for brakes can be customized for each circuit to ensure the car’s best possible performance, independently of external conditions. 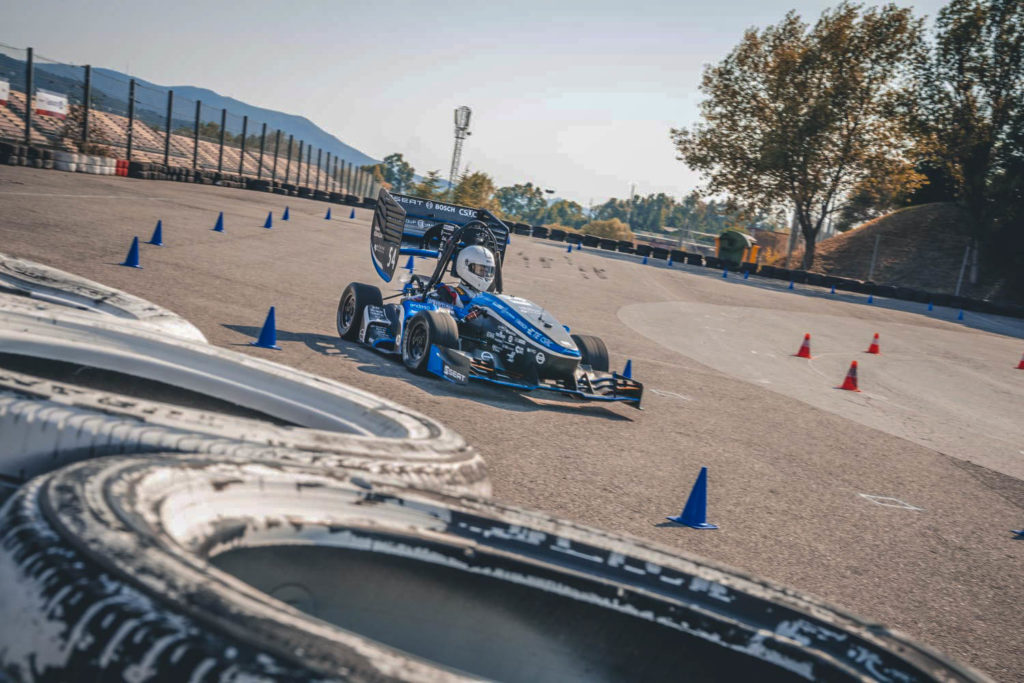 Made up of students from the Barcelona School of Industrial Engineering (ETSEIB) and the Barcelona School of Telecommunications Engineering (ETSETB), the ETSEIB Motorsport team focuses on designing and building two cars that they use to compete in the Student Formula tournament against other teams from all around the world. Both of their vehicles are 100% electric, one driven by a pilot and the other one driverless.

Being a student team, the budget for the development and construction of their cars is limited, and its members are always on the lookout for new fabrication methods which will allow them to obtain the cheapest solutions without compromising quality – which, when it comes to racing cars, can make the difference between a victory and a disastrous accident.

That’s how the engineers of the group started investigating the possibilities of 3D printing to produce some of their end-use parts, a technology that has since been fully incorporated thanks to its great results. ETSEIB Motorsport is currently using 3D printing to manufacture cooling ducts for brakes, customized for each circuit they race in and fabricated in PAHT CF15.

A matter of brakes

When it comes to these vehicles, the performance of the brakes is directly related to the temperature at which they work. This temperature increases the more you brake and, the higher the temperature, the lower the coefficient of friction and, consequently, the worse the braking.

Of course, the operation of the brakes is essential for the general performance and handling of the car. An excessive overheating could deform the disc, causing vibrations and even total failure of the braking system. For that reason, to ensure that the temperature does not rise and does not affect its functionality, it is essential to incorporate cooling brake ducts.

Customization per circuit: the secret to success

Even if these cooling brake ducts could be the same on all occasions, the secret to success in this level of racing lies in customization, looking at each specific circuit, and modifying accordingly the air intake section that is redirected to the brake disks.

Why? Well, the larger the section, the more cooling, but larger sections will also cause bigger air resistance, which produces a significant loss of speed.

On circuits with many curves, it is necessary to brake constantly, so good cooling is needed to ensure optimal brake performance. For this purpose, a duct with the largest possible section should be used to redirect more air to the brake. On the other hand, on circuits with many straight lines and few curves, having a duct with a smaller section mounted will improve aerodynamics and enable the vehicle to be faster.

The amount of curves that can be found on a certain circuit has, then, a huge effect on the car’s performance, and correctly adapting to these conditions can make a huge difference in the final results of the race.

The traditional alternative production method to obtain this part would be carbon fiber cloth stacking, commonly used in competitions whose teams have more resources and budget. With this fabrication method, it would take a mold and a counter mold made of CNC aluminum or high-density polyurethane (depending on the number of copies to make), a removable silicone insert to replicate the inside of the piece, a square meter of carbon fiber fabric of 200 grams and a liter of epoxy resin. 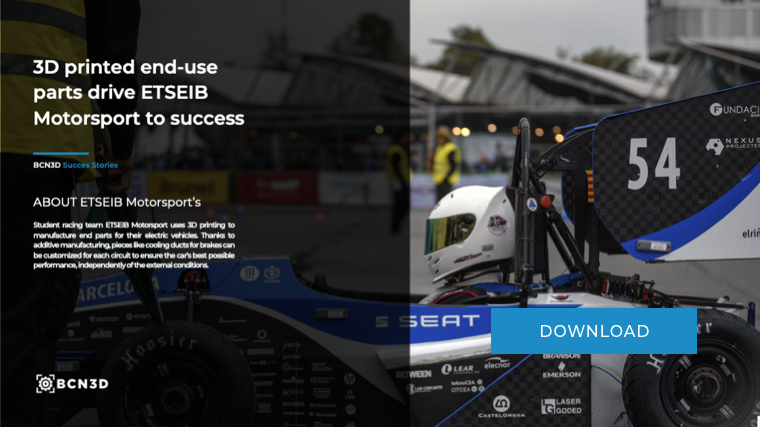 PAHT CF15, the ideal material thanks to its resistance and rigidity

The chosen option by the ETSEIB Motorsport team has been to, instead, 3D print each one of the three ducts they use on their BCN3D Epsilon. This part needs to be rigid so as not to bend during its use due to the force of the air, and it must also withstand working temperatures of up to 100ºC. That’s why this part is being fabricated in High-Temperature Polyamide carbon fiber reinforced (PAHT CF 15), a material that allows working under 150ºC continuous temperatures with the peak temperature of 180ºC, which ensures dimensional stability during use.

This material offers Young’s modulus of 8.3GPa, which provides sufficient rigidity for use and will withstand impacts from stones or other particles during the course of the race. Thanks to the BCN3D Epsilon, which incorporates a HEPA filter and an active carbon filter, combined with the Hotend X, the PAHT CF 15 can be easily and safely printed to achieve a perfectly functioning end-use part.

Let’s not forget the budget issue! In a case like this, the manufacture of the molds and the insert through traditional methods would entail a cost of about €600, and the piece itself would cost around €90.

However, by choosing to fabricate it in FFF with a BCN3D Epsilon, using PAHT CF15 combined with PVA and taking a manufacturing time of 8.5 hours, the cost per part for the ETSEIB Motorsport team is €32.5.

It is fair to mention that parts made through carbon fiber cloth stacking are lighter, but still have their cons as, in addition to their higher production costs, their design is limited by the manufacturing process and the end result is more fragile.

The particles deposited on the track such as gravel, tire chips, etc, can cause severe damages to the fiber components when the car is driven at high speed, whereas the PA behaves much better in this kind of situations, extending the useful life of the part, a highly valued feature in competitions like Formula Student, where cars are built against the clock and with a low budget.

The 3D printing brim, skirt and raft: 3 bases to improve your adhesion