Two industrial designers have created a 3D printed custom swim fin for Pedro, a 16-year-old who suffered from paralysis in half of his body following a stroke. Pedro is a sixteen-year-old from Barcelona with a passion for sport. In August of 2012, he suffered a left ganglia basal haemorrhage, also known as a stroke. After being paralyzed in half of his body, Pedro underwent a long period of rehabilitation and recovered a great part of his mobility. However, his right hand was still affected by spasticity: a disorder of the central nervous system that causes an increase of the muscular tone hindering totally or partially the movement of the affected muscles.

How the swim fin project began

In July 2016, Pedro participated in a sports project at the Club de Natació l’Hospitalet, a swimming club that had recently created an adapted swimming section.

Due to the spasticity, Pedro was having difficulty positioning his hand properly when swimming. In order to find a solution, his coach Àlex Agut and president of the swimming club Jordi Lorca contacted the Polytechnic University of Catalonia’s CIM centre (CIM UPC), a prestigious university center in Barcelona known for its Masters and Postgraduate degrees.

Students of the Master’s degree in Design and Engineering in Product Development Marc Roca and Iñigo Martínez-Ayo were selected to create a new swimming fin designed specifically for Pedro. The first stages of product development, such as prototyping and testing, are usually where the most amount of time and money is spent. Before the launch of a product, it must be tried and tested through prototypes to ensure the highest quality.

Traditionally, this is an extremely long process, and so companies adapt by only creating a few trial versions of their product. However, the fewer the prototypes, the more room for error in the final product.

Nowadays, 3D printing means that companies and professionals are able to conduct a more efficient and rigorous product development. Not only can they produce more prototypes in less time, they can also use materials with similar properties to those of the eventual commercialized product.

With the use of their BCN3D Sigma 3D printer, Marc and Iñigo developed Pedro’s fin in less than four weeks. During this time, they created ten functional prototypes in different shapes and materials within a budget of 100 €. From the results of various tests, they decided to manufacture the swimming fin in Nylon (PA), a material used extensively for its unique mechanical and chemical properties. Thanks to characteristics like durability, flexibility and resistance to corrosion, PA is ideal for multiple applications in the 3D printing field, such as end-use parts or custom jigs and fixtures.

To successfully print the PA part, the students used IDEX technology with PVA as a support material in the second extruder of the BCN3D Sigma. PVA is a water-soluble polymer, ideal as support material for printing complex geometries, large overhangs and intricate cavities. These supports also allow for better surface quality and orientation of the part for better mechanical properties.

Thanks to the swiftness of the 3D printing process, Pedro received his personalized 3D printed swimming fin in a very short period of time. With the use of his fin, he experienced the following advantages: This fast yet high-quality project illustrates the numerous advantages that 3D printing can offer. The students managed to fulfill a design brief specific to Pedro’s needs, and the results speak for themselves! 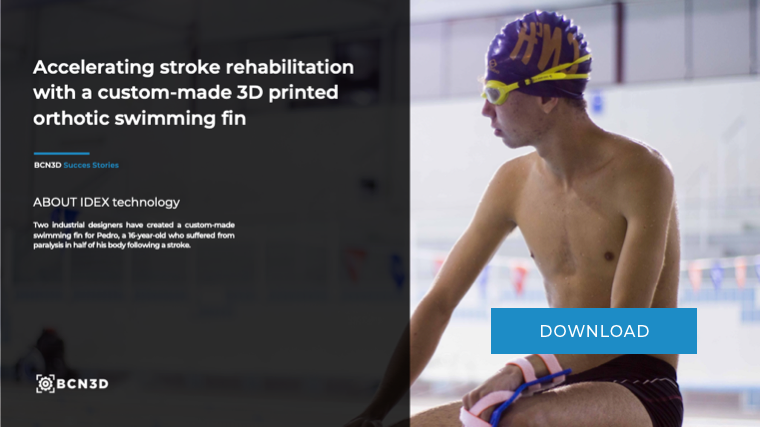